First staged in 1983 by Downtown Fort Worth, Inc., the Parade of Lights began as a means to help change perceptions of the Central Business District.  At that time, downtown stakeholders realized that a unifying event such as the Parade of Lights would provide an opportunity for residents and visitors alike to see downtown as a place of celebration, entertainment, fun and relaxation.

Now, 37 years later, downtown Fort Worth is a downtown envied by cities around the nation, and provides an environment where close to 96% of the available office space is occupied, where downtown living opportunities are available and affordable, and where people from throughout the Metroplex gather to have a wonderful time in the restaurants, clubs and entertainment facilities.

The parade has grown from 25 units in 1983 to well over 100 units today.  The crowd of 25,000 people in its first year along Main Street has grown as well, with over 200,000 lining Commerce, 6th and Houston Streets.  Here’s how Bobbye (Jo Mosely) Brooks, a 25-year volunteer who was one of the original coordinators, remembers it during our 25th celebration in 2007, and just before she passed away:

“Twenty five years ago the merchants in downtown Fort Worth formed Downtown Fort Worth Inc. to promote our city.  At this time the area was bleak and needed to be revived. Ken Devero was hired to manage the association and lead the twelve merchants in planning an event to bring the people downtown.  What better way than to have a parade to introduce the Christmas Season?  Scheduled for the Friday after Thanksgiving, the parade would be at night and the floats would all be lighted. This was the beginning of the Parade of Lights.  The Fort Worth Independent School District, associations, churches, organizations and other communities were invited to participate in the parade by signing a contract and paying a fee to support the event.

“The FWISD involved the director of bands, Howard Freeman, and me (I was the art director for the district at the time) to help organize the parade.  Mr. Freeman sent letters inviting local high school bands, but the band directors in the schools reminded Mr. Freeman that this was a holiday and their band members would most likely be out of town.  A donation to the band was then offered to encourage participation.  That problem was then overcome when the parade was viewed by thousands of people and everyone looked forward to the next event.

“As art director for FWISD, I sent letters to high school principals and their art teachers to participate by decorating and furnishing a float. Phones rang off the wall asking where could they find a float, where could it be kept before the parade, etc.  I went to the library to research books on parades.  Only one book was found – and it was on Macys Parade.  This book had everything that one would need to know about guidelines for a parade.  The Fort Worth parade was based on this information.  Orientations were held and hand outs were provided the first year.  The second year participants viewed slides of the first year parade in addition to the handouts.

“The first year we had two schools enter a float featuring a covered wagon decorated using the theme that year.  Participants sent in their contracts and fees. Our committee then used colored index cards to place the entries for the line up to provide a variety, always keeping in mind that horses were not to be placed by loud music.  Our committee at that time consisted of Todd Holzaepfel, Vice President of Operations for DFWI, Robbie McMeans, Office Manager for DFWI, Howard Freeman and me from FWISD.

“We staged the parade in the old Tandy Center parking lot (remember the subway system?) with the exception of the bands and walking units.  Our committee checked in at the entrance gate to receive our radios and notices of last minute changes.

“Judging took place for horses, antique and classic vehicles, walkers, and floats (commercial and non commercial). Judges turned in their list of winners and the winners were then presented with ribbons that were to be on the left side for the announcer to recognize their accomplishment.  Judges were provided reserved chairs to view the parade. Since the units were judged in the daylight they were often wishing that they had made another choice as the lighting looked so different at night.  A few years later stands were provided.  The Tandy Center was no longer available and the judging was then made during the parade and announcements made on a later day and ribbons presented at that time.

“The volunteers were treated to a dinner after the parade at hotels downtown.  Each hotel had beautiful pastries.  Since the parade has grown so large the party is now held later in the year.

“We now have a class one parade and the people come by 4:00 pm or earlier to get a place. They bring their chairs, blankets, water, snacks, etc. to be comfortable.  Weather has caused the parade to be canceled only one year.  We all know to pay special attention to the weather reports, dress in layers and wear comfortable shoes.”

Note: Bobbye Brooks passed away in late 2007. As a volunteer, Bobbye was integral to the success of the Parade of Lights, and she will be remembered always for her contributions.

In 2015, after considerable debate and conversations with Downtown stakeholders and participants, the Parade of Lights moved to the Sunday before Thanksgiving, starting a new tradition.  The success of the the Parade of Lights depends on the community, and its willingness to continue to bring high quality floats, marching units and equestrian units to the streets of downtown.  Close to 80% of the parade participants are local non-profit organizations, looking to showcase their neighborhoods or community programs.  Finally, we have developed strict requirements for lighting of all of our units, and participants work hard to be sure enough lights are used to bring only the best to the people of Fort Worth.

In 2017, the parade’s date was moved from the Friday after Thanksgiving to the Sunday before Thanksgiving to allow Downtown retail, which had been growing exponentially, to have a renewed day of shopping and activity. GM Financial became title sponsor in 2018. General Motors Financial Company, Inc. is the wholly-owned captive finance subsidiary of General Motors Company and is headquartered in Fort Worth, Texas. In 2019 the parade was televised live on TXA-21, and on Facebook live. 2019 was our 37th year

In 2020, the GM Financial Parade of Lights was re-imagined as a television-only production, using sound stages at the Convention Center, Jubilee Theater and on Main Street in Downtown.

Back live in 2021, the GM Financial Parade of Lights had one mission: to bring the community of Fort Worth together in a spirit of community celebration during the holidays, and to celebrate our wonderful center city. Ms. Opal Lee served as the Grand Marshal of a record-setting Parade of Lights! 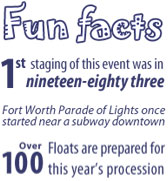